The first camping trip of the season…. 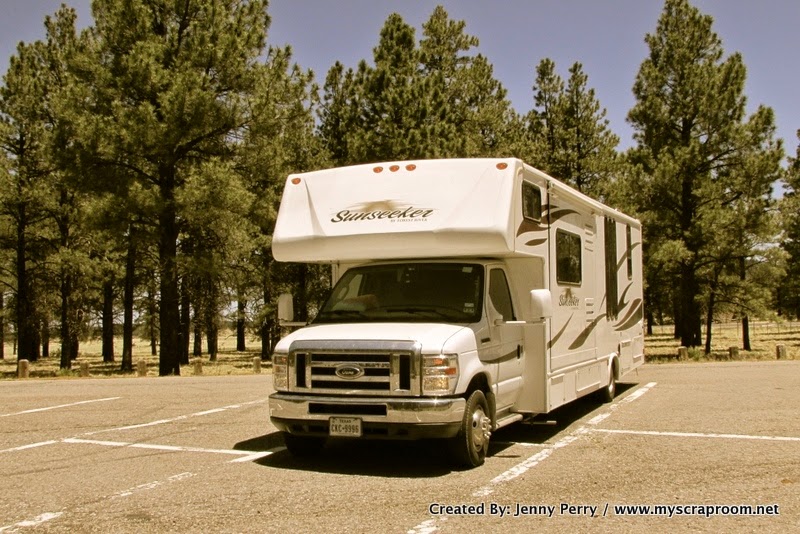 We were off to a very late start because Mike was a part of a Microsoft conference on Friday and we did not even leave the house until 8pm.  Thankfully I called the park was told that the office was open until 10:00pm - we pulled in at 9:30.  So that means that once we found our site we were trying to set up at 10:00pm during park quite hours.  Let’s just say we were about as quite as we could be and I am sure our fellow campers were not too happy to see us.

We  learned during set up that I really have no business getting behind the wheel of this camper.  You would never know that I come from a truck driving family! Driving  large vehicles scare the crap out of me.  Let’s just say that while we were trying to level the camper in this site, I panicked and now we have a small repair to make.  Mike was his usual self and more worried about me than the camper but I think we will stop trying to teach me how to drive this thing.  If it means I have to drive to get there in this 32ft vacation wonder then we just will not go.  (hee hee).

We try to always have our first camping trip of the season at  Eisenhower State Park because they have full hook up sites and that comes in really handy when it is time to de-winterize the camper.  It takes a bit of water to flush the system and it is a pain in the butt job if we have to keep breaking camping to go to the dump station when the holding tanks get full.  But full hook-up means that we can tie into the septic system right at our campsite and just open our tanks right there and then when they are full.

We have power (again), we are as level as we can get in this site, and we have full use of our water system.  Can we please eat dinner? I checked the weather forecast  and saw that we have an 80% chance of rain all weekend so I did something that is very rare.  I packed food that can be made INSIDE the camper.  Yep we will not have to worry about cooking in the rain this weekend.   I was singing my mother’s praises big time for dinner.  I raided my deep freeze and found a quart of spicy pinto beans and a quart of broccoli cheese soup.  We had the pinto beans with a loaf of french bread Friday night and it only required the microwave for a quick heat up.  Those beans were fantastic!   I put huge potatoes in the crock pot Saturday morning on low and by 6:00pm they were ready to eat along with the broccoli cheese soup.  Last year when we were here we ran out of food while camping because we decided to stay an extra day so this year I packed a spare meal.  It is just one of those frozen skillet meals and a bag salad but it is easy to make on a rainy day if need be.  We try to do all of our cooking outside unless I am using the crock pot for some reason so that the camper does not pick up any funky smells and it it fun to cook over the fire but when rain is in the forecast you have to roll with the punches.

Mikes parents drove out yesterday and we had fun sitting by the fire and just talking.  The campsite is about an hour from their house and they just popped over to see what we were up too.  I love when we have campsite visitors.  I was happy that it did not rain while they were here and I even discovered that my knees were a little sunburned later last night.

Now I am sitting here having coffee and watching the world wake up.  The bunnies are hopping and the birds are trying to catch the bunnies while dogs and their owners make the morning walk around the park.  Mike is still sleeping and I am a little surprised that the smell of coffee has not made him get out of bed.  The storms did roll in around 1am and I know I was awake so I am sure he was too.  I think I will let him sleep in a bit.  I did just open the windows because I want to hear the birds so there is a chance he will wander out soon.

This is one of those weekends that I just did not want to be behind the lens.

My camera is on the camper but just not been used this weekend.  Granted the loop that we are on is fairly full so that means less wildlife but it was nice not carrying around the camera.  It has not been a total no tech gear weekend - as you can tell I brought my laptop.  We generally have a no laptop rule for camping because of the Piggly Wiggly incident but now that I can blog off line that means that when inspiration strikes I can get my thoughts down before I forget.  I brought my iPod to listen too if it rained and I have a bunch of Papercrafting Roundtable to listen too.  I am a wee bit behind on that podcast.  They always have great scrapbooking discussions and industry leaders on their panel of guests.  The questions that they pose always seem to be great blogs posts too so I always listen with paper close at hand so I can take notes and pass on some of what I have learned or been thinking about with you.  I think I will use the 12 hour flight to Norway next month to catch up on what they have been up too.  The flight home will most likely be posts with photos from the trip.  Mike will be preparing for his conference so I will entertain myself as much as possible so he can prepare for his speaking engagement.  We will be going to Norway for the Norwegian Developers Conference (NDC) It is a geek thing and Mike has been asked to speak during the conference.  He is beyond happy!  It is going to be a very fast trip and Michelle is staying at the house with the puppies for us.  I have a feeling that when we get home my already messed up body clock is going to be very cranky but remind me that it was worth it when I am a super grouch.

All in all it has been a great first camping trip of the season.

Posted by Jennifer Perry - My Scraproom at 3:46 PM